If BP is expected to compensate fishermen in the Gulf (which is only fair, considering that it's their fault fishing is closed), shouldn't the "world leaders" compensate the business owners in Toronto who are being shut down for the G20 summit?
Life inside the G20 ‘security zone'

On the Internet "kill switch" bill: "No, it'll be fine, China has one, and we know how great it is there for freedom of expression"


Would you trust Bush/Cheney with this power?

The Polish plane that crashed yesterday and killed 96 people in the Russian city of Smolensk was bringing them to a memorial for the Katyn massacre.
Before the summer of 1941, the Soviets and the Nazis had a non-aggression pact, and divided Poland between them. In 1940, the Soviet NKVD (predecessor of the KGB) murdered almost 22000 Polish prisoners of war in the Katyn forest. Conscription meant that most of the college-educated Poles were in the officer corps and were held as POWs.

When the Nazis were losing territory on the Eastern front, the Soviets "discovered" the mass gaves and called it a Nazi crime. The British and US governments helped in the cover up to support their Soviet ally, going so far as to imprison a British poet who published an account, and reassigning an American officer to the American Samoa to prevent him from releasing his report concluding that it was a Soviet crime.

It wasn't until 1990 that Gorbachev admitted the Soviet guilt. Yeltsin released the documents ordering the murders in 1991 and 1992.

April 13 is International Day of Katyn Victims Memorial, the day the graves were discovered. Katyn is a big deal to Poles and people of Polish extraction, and still a major contention between the Polish and Russian governments.

Memorials have been controversial due to the cover-up. There's one in Jersey City, at Exchange Place: 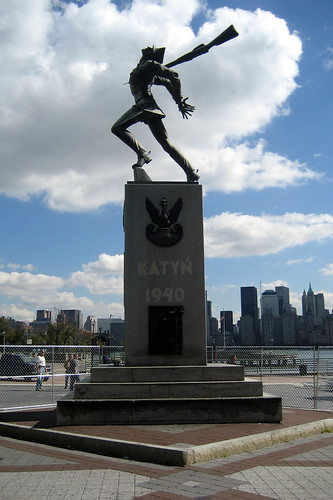 created by Andrzej Pityski (note that it's a Soviet SVT-40 stabbing the soldier in the back), and driven by former Polish resistance fighter Stanley Paszul; it was nearly torn down for a 9/11 memorial. A vigil was held there last night.

why people think that NPR is the most boring thing on the air. Every time I hear something related to economics, I want to reach through the radio and strangle the writers and presenters.

Here's a prime example from this morning, complaining of "currency manipulation" by China.

Basically, the accusation is that China's central bank simply prints more yuan when Chinese manufacturers bring dollars from their customers for exchange, rather than allowing the value of the renminbi rise due to increased demand. (Well, at least they understand the concept of supply and demand determining price, something often overlooked in NPR economics articles)

They completely ignore that the currency manipulation above is exactly what the Federal Reserve does when they talk about an "accommodative" monetary policy or maintaining a target interest rate. The way the Fed keeps a low interest rate is by creating dollars if there is increased demand for loans. It's exactly the same process, just using a different metric.

All fiat money is manipulated. To pick out China's central bank is just trying to avoid facing our own economic problems.

There are few automotive industry things more frustrating than the Geneva Auto Show. That's the show where we get to see all of the cars that are being built for Europe, and won't be exported here. It's like waking up on Christmas morning and being told that your family converted to Judaism overnight.
( Collapse )

So the DoD's Missile Defense Agency changed its logo.

Gee, you don't think it bears a little resemblance to this:

But wait, it gets better
( Collapse )

I will always be with you.

Oh, and I choo-choo-choose you

I really wish schools would teach statistics and probability to everyone.

Back in 2005, the unusual number of hurricanes was cited as "proof" that global warming was undeniable, and we all must sacrifice our SUVs to the gods. Now, we have GW skeptics claiming that the back-to-back snowstorms on the east coast are "proof" that GW is a fraud.

Both claims are bullshit.

First off, those particular events loom much larger in public discussion because they've received a lot of media attention. Any event in the imperial capital always gets a lot of attention. (Though in my opinion, anything that shuts down Leviathan for a week is a blessing)

Time's recent article does point this out.

Ultimately, however, it's a mistake to use any one storm — or even a season's worth of storms — to disprove climate change (or to prove it; some environmentalists have wrongly tied the lack of snow in Vancouver, the site of the Winter Olympic Games, which begin this week, to global warming).

But it also raises more questions:

But as far as winter storms go, shouldn't climate change make it too warm for snow to fall? Eventually that is likely to happen — but probably not for a while. In the meantime, warmer air could be supercharged with moisture and, as long as the temperature remains below 32°F, it will result in blizzards rather than drenching winter rainstorms.

which raises the question about sea-level change. Much of Antarctica is well below 0C. A few degrees warmer will still be below freezing, which countering the sea-level rises based on huge amounts of aboveground antarctic ice melting into the sea.

The article's last claim is probably one of the best:

Weather is what will happen next weekend; climate is what will happen over the next decades and centuries. And while our ability to predict the former has become reasonably reliable, scientists are still a long way from being able to make accurate projections about the future of the global climate.

Maybe people should stop claiming GW is anything more than a guess.

Robert F. Kennedy Jr., I'm looking at you. It's pretty hypocritical to complain about the right using anecdotes to discredit GW when you have done the exact same thing yourself.

Pennsylvania's tourist bureau made these ads to promote cycle touring:
It's like The Office of cycling, and I'm pretty sure the sidekick is another Schrute cousin. The people who made it have watched a lot of cycling interviews. I've seen guys just like these in more than a few documentaries.

OK, they're not technically public service announcements, but they're close enough.

Food aid, emergency tents, and inflatable hospitals may be a short short term priority for Haiti, but will never be the basis for rebuilding the country. You need a functional economy for that.

One thing that the government could do to help that along is to drop the trade restrictions on sugar imported from Haiti. Without the barriers imposed by government, Haitian farmers would have a viable export market for sugar, which would generate income to pay for domestic and imported supplies and capital goods.

This would have the added benefit for US consumers in lower prices for sugar, as well as less of the Florida everglades used for marginal sugar production.

But that's pitting Haitian farmers, US consumers and environmentalists against the major US sugar and corn syrup producers who benefit from the tariffs. Guess who will win...
Collapse